Limits to Growth is an idea as well as a book that was published in the early 1970s. A group of experts in various fields (The Club of Rome) worked together to specify a “formal, mathematical model” of the world “built specifically to investigate five major trends of global concern-accelerating industrialization, rapid population growth, widespread malnutrition, depletion of nonrenewable resources, and a deteriorating environment.” The resulting computer simulation helped them better understand these problems and their implications. From what I understood from reviews and critiques, their overall predictions have stood up pretty well so far. The great acceleration slides we looked at in class demonstrate the exponential growth that the book also explains in its first chapter. They concluded the following:

1. If the present growth trends in world population, industrialization, pollution, food production, and resource depletion continue unchanged, the limits to growth on this planet will be reached sometime within the next one hundred years. The most probable result will be a rather sudden and uncontrollable decline in both population and industrial capacity.

2. It is possible to alter these growth trends and to establish a condition of ecological and economic stability that is sustainable far into the future. The state of global equilibrium could be designed so that the basic material needs of each person on earth are satisfied and each person has an equal opportunity to realize his individual human potential.

3. If the world’s people decide to strive for this second out- come rather than the first, the sooner they begin working to attain it, the greater will be their chances of success.

The limits to growth refer to the physical and social boundaries beyond which these trends cannot continue. Physical limits include: “food, raw materials, fossil and nuclear fuels, the ecological system of the planet which absorb wastes and recycle important chemical substances” including “arable land, fresh water, metals, forests, the oceans.” Social limits refer to “peace and social stability, education and employment, and steady technological progress.”

Limits to Growth is an idea that continues to be revisited by others. Trying to take this very large and complex system model and turn it into a an exploration or experiment seemed daunting, so I tried to find other angles and ways of conceptualizing this. I thought the 9 life support systems and their boundaries, which we saw in class, was an interesting way to look at this same idea. After reading some of Limits to Growth it seems more like this visualization doesn’t easily convey the interaction between these systems. Earth Overshoot Day which “marks the date when humanity’s demand for ecological resources and services in a given year exceeds what Earth can regenerate in that year,” also seemed like an interesting way to bring these ideas to a human-understandable scale. I found this cool map and timeline that explored world population growth. I re-learned that “carrying capacity” is “the maximum number of a species an environment can support indefinitely.”

Some questions I had after this initial exploration were:

To gain more focus I asked this second question more directly and found this Guardian article which listed natural resources most under pressure: water, oil, natural gas, phosphorus, coal, and rare earth elements (there are 17).

Some surprises for me were: (1) the importance of phosphorus depletion and (2) pollution is also increasing exponentially (this shouldn’t have been a surprise but I hadn’t thought of it this way).

I thought of some ways I could experiment:

…and decided to learn about this phosphorus depletion problem more closely and created a computational poem with some tools I’ve just been introduced to. I gathered my source text from Phosphorus Futures, a phosphorus research initiative (the alliteration in their name and website was part of my inspiration). I learned that phosphorus is a non-renewal resource used to create industrial fertilizer: this ties into the limits of arable land, pollution, food production, and as a result also human population growth and the social and political stresses associated with food insecurity. 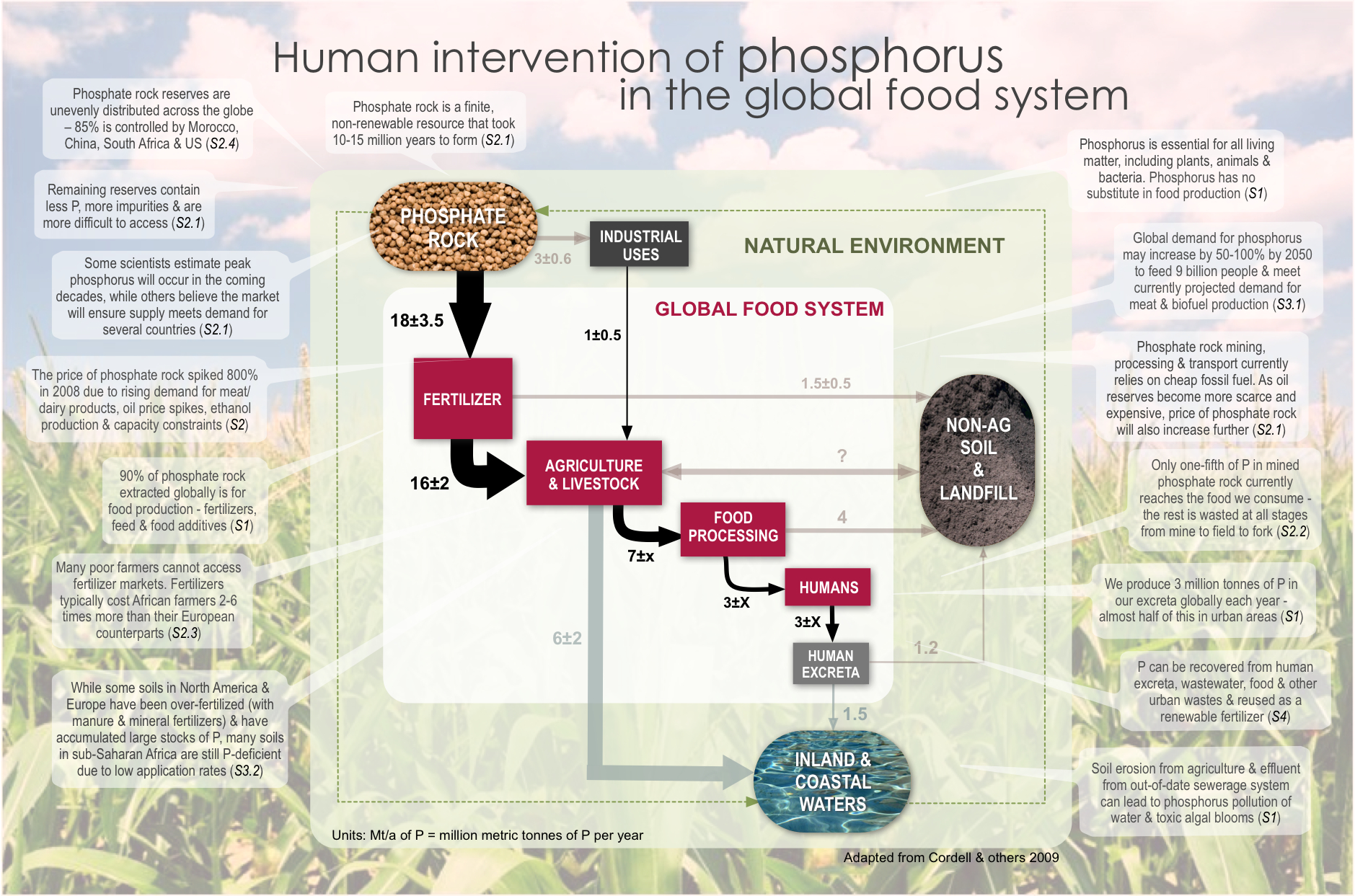