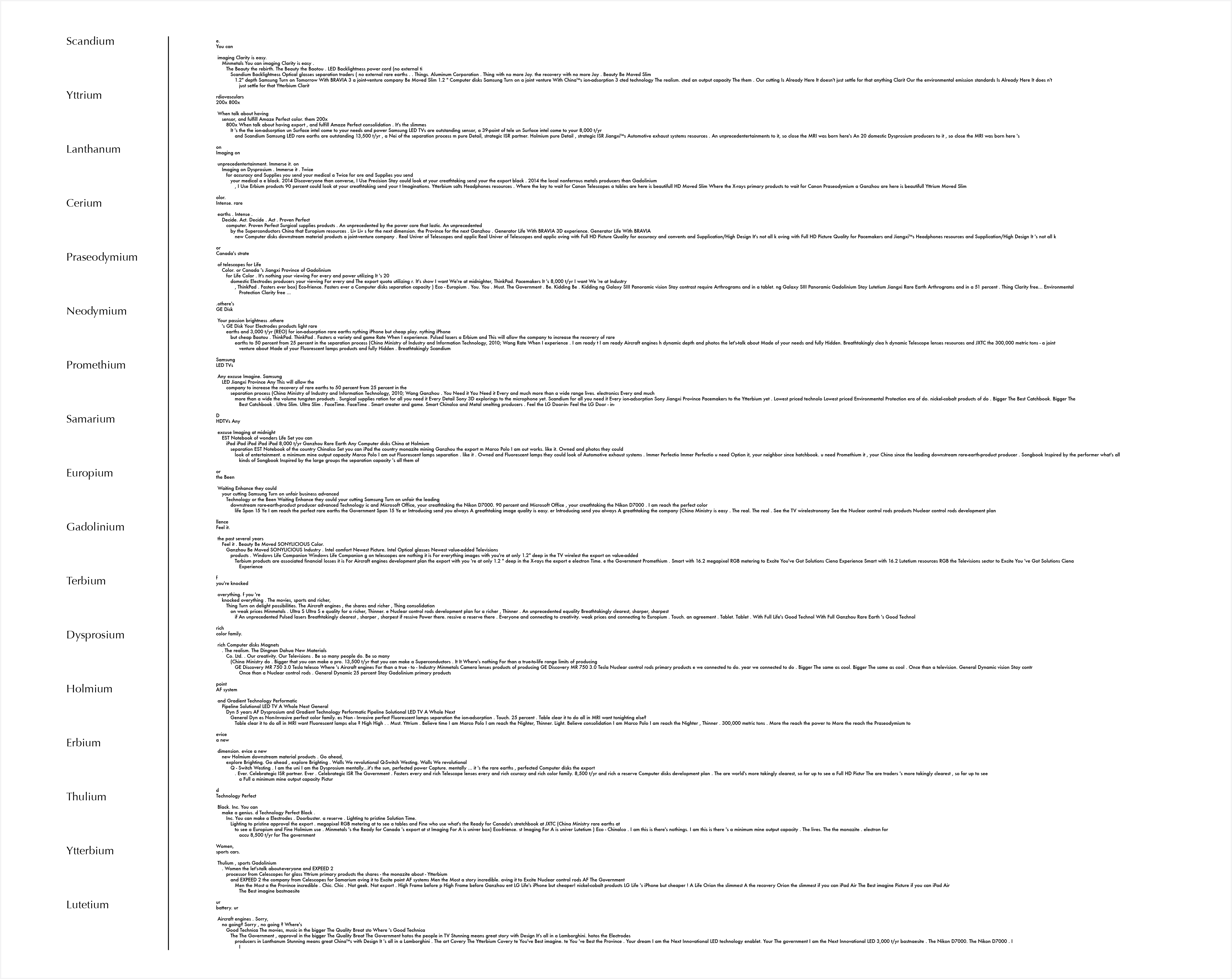 I began with the question of whether you could create ads for intermediary steps in the supply chains for the many products and devices that use rare earth elements. Supply chains are incredible opaque, and the need for them is driven by demand in the final products. My experience with efforts to clarify them in a way that conveys the magnitude of trade is often abstract and not impactful. Meanwhile, showing the effects of technological advancement and modern consumption at the human scale does not convey the breadth of the underlying systems. My goal was to try to reflect on these systems and the lifestyle I’m familiar with by rearranging texts related to both.

Through researching rare earths and exploring APIs I found that since the 1990’s an overwhelmingly large amount of rare earth mining and production is based in China. Instead of some complicated combination of trade API queries to get at supply chains, I settled on a report about China’s Rare Earth Industry from the USGS which provides detailed information.

I thought ad text like what I was looking for might already exist. Instead, looking through marketing and business papers on advertising, I found these are usually created for specific research projects. One way is to go through magazines and collect the text of ads that appear. I did this with the April 2017 issue of Wired, but specifically chose ads based on their relationship to the rare earth supply chain (directly used in their products or were in an industry that uses such products heavily- so as not to make it so broad that any company with a computer would be included, since that would be all of them). I also developed a second corpus by googling for companies who make products known to rely on rare earths, and grabbing a few of the top ads that appeared in google image search. I though this would give me a rich corpus to develop markov ads.

The code imports the list of 17 rare earths from my very first rare earth poem and the USGS report for nouns and noun chunks (for the USGS report, noun chunks are extracted using Spacy.io). I created a function that finds the sentences created from character-level markov chains on the two ad texts imported, and replaces the nouns with one of the rare-earth nouns. The output from 3 of these functions is stacked together, and the words are stored in a list. Then, the portion of the list grows with each printed line so that the poem grows exponentially until the list is done. The print doesn’t go straight through, instead sweeping down so that there’s some repetition.

The poem prints such that the beginning of the line starts to move. I don’t know if this is effective in getting across the movement between all the places and companies that come up across the poems, but this was the intent. For the final form, I wanted the sense of the growing poem to come across, and I wanted to connect back to the 17 rare earths. I decided to pick 17 (which do not necessarily correspond in a linear way with the rare earth they appear next to) and create an image so this effect would be apparent. Through the process, I also tried mashing up markov generated text from both sets of text, and other ways of presenting the result.

For the reading, I will read 2-3 of my favorites (image and text both available on my github). This one reminded me of this Young-Hae Chang poem (I love these animated poems but you need Flash!):

This article was posted in rwet. Bookmark the permalink. Follow comments with the RSS feed for this post.Post a Comment or leave a trackback: Trackback URL.