This week I learned about the green revolution, which increased world-wide food production and fed masses of people, but resulted in inefficiencies to the extent that more energy is being used to produce food than its output. I also learned about the haber-bosch process–its use in industry is responsible for massive amounts of ‘nitrogen fixation.’

I couldn’t shake this interest in the massive amounts of algae being produced by over-fertilization. I found there’s a distinction between toxic & non-toxic algal blooms (this is a very cool project focused on the toxic algal blooms in Lake Erie). New York State has a website with information about, and contacting information for reporting HABS (harmful algae blooms). But, there are thousands of species of algae. I didn’t realize how much work was being put into innovative uses of algae. I found this industry site that catalogs innovations, research, and news. Algae is being used as biofertilizer and biofuel, to the extent that it’s already displacing some other agriculture.

I wanted to know what algae looked like at the micro level because I hadn’t seen it yet and wondered if it was a possible way to form my project. 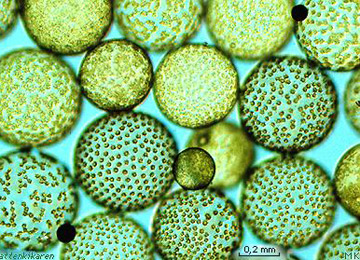 After the analogy exercise we did in class I kept thinking about algae death and hypoxia–how in a way the algae are suffocated the life in the waters where they bloom, and how in the end they are also displacing the nutrients, water, and oxygen that other living things, including humans, need. I found this algaculture project while learning about algae farming, which struck me partially because of the uncomfortable-looking design which reminded me of the asphyxiation I began to associate with algae blooms. It’s also an imaginative extrapolation into what humans and our food source might become.

How fragile is our food system? If we run out of fertilizer how will we eat? Do we want to live in a future where the answer is algae?

I was able to send along some questions to one professor, and will meet with another at NYU this week. I hope to address some broad questions about how phosphorus depletion and over-fertilization relate to other planetary systems and boundaries, and more specific questions about the potential for recycling and re-use, including potentially the cultivation of algae.

What if we could manage nutrient flows and algae growth in such a way that we could usefully re-purpose the algae grown? The potential for algae re-use is interesting because it intersects with a number of other planetary boundaries we’re approaching: fresh water use, land use, the nitrogen cycle, the phosphorus cycle, and climate change. It could perhaps also address biodiversity loss if the toxic algal blooms are related to species die off at a significant rate (this is real but I am unsure of the magnitude), and definitely relates to social limits: most directly, food security.

At first I imagined taking a critical approach, where giving people a way to envision the pills and soylent-like concoctions of our likely future would be incentive to avoid such a fate. But after doing more research I am very curious about the viability. I also wonder whether people will be disgusted regardless of whether the product is purposefully unappetizing, or if edible algae could be made desirable.

In the future we may use the runoff from farms or cities to grow algae that among other uses like biofuel, could be used for food. Products that may result include algae spread, algae pills, and algae alcohol. By purposefully engineering the runoff with these non-toxic algae, these blooms will not only be controlled, but be useful, nutritious, and maybe trendy.